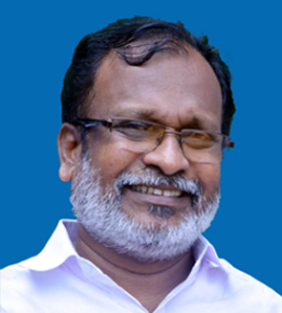 Early Life. Born on 30th May 1955 in a small village in Punalur, Kerala as the son of Shri. Chellappan and Sarada. He lost his mother in hischildhood. After the untimely demise of his mother, he starved for the love of a mother. In his early life , he has struggled a lot for his education and childhood needs. Dr Somarajan completed his education in the native village only. Came into public life through the balajanasakhyam, radio club and actively participated in art, literature and social works. Has been a regular columnist in periodicals, wrote poems and essays and wrote some radio plays and children’s literature ‘Jagadguru’, ‘Sreenarayanan’, ‘Mash’ etc in Malayalam. Worked as a teacher in parallel colleges.

Entry into Philanthropy. His father was also a Samaritan. He used to see that his father bring the poor and the drifter to his home, bathed them, gave food, a pair of cloths and a square to sleep. When he grew up, he found the answer which nagged in his childhood. That answer morphed him into a more practical solution to the question. He strives to blot out the word ‘orphan’ from our social discourse. Finally, make a solution for the word “orphan” and decided to start an institution called Gandhibhavan on Nov 2002.

Gandhibhavan is taking care of more than 1200 destitute and abandoned inmates of different ages ranging from months old baby to a 106 years old great grandma. Out of which 300 are bedridden patients, most of them are severely ill, mentally ill, mentally retarded. They all have been provided accommodation, food, clothing and round the clock medical attention by dedicated team of doctors and nursing staff. There are more the 300 volunteers serving with us and all of them are being paid with an honorarium as means to warm the ovens at their home.

Ambitions. His dream for a Janakeeya Medical College to provide free diagnosis and treatments to poor, needy and deserving community in the society. As the name `Janakeeya’ indicates the project will be established with the help of public contributions only and for the public benefit only. That will be a Medical College and Research Centre for joint treatment of Allopathy, Ayurveda, Siddha and surgery under allopathic treatment.


Donate to Gandhibhavan
Purchase the available items from Online websites & Ship to our address. Know how

Web Design by I DO Designs